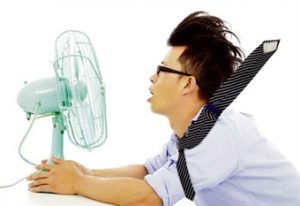 Big tests, like other big moments in our lives, demand our best, which can be difficult to find when we are overheated and drenched in sweat. Such a conclusion seems obvious, but apart from some amateur studies, not enough research has been done on the relationship between temperature and test scores. In the workplace, performance finds its sweet spot between 69.8° and 71.6°F. Does the same apply in school?

1. Heat stress during exams reduces student performance.
Students who took Regents exams on a 90˚F day earned consistently lower scores than students who tested on cooler days, leading to a 10.5% lower likelihood of passing any given subject.

In the United Kingdom, the Association of Teachers and Lecturers considers that classrooms should be at least 18°C, which is about 65˚F, yet suggest no maximum classroom temperature. The U.S. doesn’t set guidelines for school temperature, but Child Care Regulations Section 101239 mandates a temperature between 68-85˚F for child care classrooms. Yet even that range can prove distracting or worse for students in schools that lack air conditioning. Obviously, public schools in many warm weather states begin summer recess as early as mid-May, but even there, students sit for the SAT and ACT in June.

Students have to contend with a variety of forces out of their control when dealing with important end-of-year exams. They cannot control how warm their classrooms will be, nor can they control climate in general. But those who plan ahead can control certain critical aspects of comfort and timing. For one, always dress for success on test day, which means being ready for a broad range of temperature. But more importantly, consider skipping June or September test dates if you have other options. The end of the school year, with finals, prom, and spring sports championships, is full of distractions. Target SAT and ACT dates from October to April and you’ll not only avoid potential heat complications, but you’ll feel cooler for planning ahead!