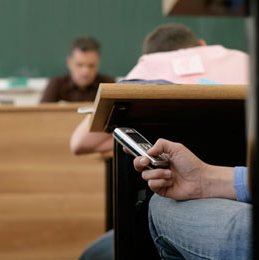 Few would dispute the smartphone’s place as one of the true marvels of the modern world. These miracle machines combine instant, on-the-go connectivity with immediate access to the larger part of the sum of accumulated human knowledge. No wonder we take our phones everywhere, even those places nobody wants you to answer their calls.

Sure, you can access the web on your phone to look up important information or new vocabulary words. You can even use its timer to implement Pomodoro Technique-style planned breaks. But for all the time these phone functions might save you, the device itself may cost you much, much more.

The key to getting more done in any area of your life is FOCUS. When we focus on single tasks at a time, we achieve better results more quickly. Multitasking, to be blunt, makes us dumber in a measurable sense. Thus, every time someone switches from a given task, even for a moment, to focus on a different task, productivity drops.

Phones are particularly pernicious because of how slavishly attentive we are to any signal of interest. Bad enough FOMO forces us to check our phones every few minutes, but even awareness of an unread email or text can throw us off track. Researchers at Florida State University observed that the attentional cost of receiving a cell phone notification can damage task performance:

We found that cellular phone notifications alone significantly disrupted performance on an attention-demanding task, even when participants did not directly interact with a mobile device during the task. The magnitude of observed distraction effects was comparable in magnitude to those seen when users actively used a mobile phone, either for voice calls or text messaging.

So getting more done might be as easy as turning off your cell phone, right? Not quite. Researchers at University of Texas found that the mere presence of smartphones significantly reduces people’s intelligence and attention spans–even when the phones are turned off.

Results from two experiments indicate that even when people are successful at maintaining sustained attention—as when avoiding the temptation to check their phones—the mere presence of these devices reduces available cognitive capacity. Moreover, these cognitive costs are highest for those highest in smartphone dependence.

No wonder exam proctors don’t even want phones in the same room on test day. Take a hint from the pros. Your smart phone can make you smarter, but only if you leave it powered down in a different room!