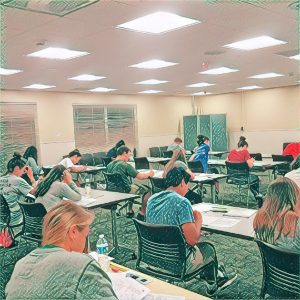 The only thing better than taking the SAT, some say, is taking it twice. But who really says that, besides test prep professionals like yours truly? Believe it or not, this flippant comment is supported by research. A new National Bureau of Economic Research study titled Take Two! SAT Retaking and College Enrollment Gaps explored data on millions of SAT-takers, finding that only half retake the exam, with even lower retake rates among low income and underrepresented minority students. What appears to be a minor finding actually presents major implications:

1. Scoring below multiples of 100 increases retaking, implying some students have round number target scores.
Even though the SAT scale doesn’t ascribe special status to round numbers, most test takers focus on those easy breakpoints. Today’s students strive for 1300 or 1400 or 1500, but the last version of the SAT, which was scaled on a 600-2400 scale, offered different targets. According to Dan Kopf at Quartz, this study found that 67.3% of students who received a 1990 tried again, compared to only 64.8% of students who scored 2000:

Anectodally, we see this left-digit bias at play with the current SAT, but the 1-36 scale of the ACT helps test takers focus more on percentile ranks and admissions requirements rather than whole numbers.

2. Regression discontinuity evidence finds retaking once improves admissions-relevant SAT scores by 0.3 standard deviations on average.
Data from the College Board and ACT support what common sense suggests: retakes work. Students generally score higher the second time they take one of these big tests, which has produced terrific outcomes in those school districts that have explored universal free testing. No wonder so many smart students take advantage of all of our practice tests! And, yes, the retake effect accrues from the PSAT to the SAT.

3. Likely by strengthening college applications, retaking substantially increases four-year college enrollment, particularly for low income and underrepresented minority students.
Data from the National Longitudinal Surveys of Youth show that a student in the top quartile of income is almost three times as likely to attend college than one in the lowest quartile and six times more likely to graduate. Among the many complex reasons why this occurs, we can see the influence of test fees, access, and school-based support.

4. Eliminating disparities in retake rates could close up to 20 percent of the income gap and 10 percent of the racial gap in four-year college enrollment.
Many states now offer free SAT or ACT testing to juniors. A powerful step forward to level the playing field would be to double the number of free administrations in order to promote retakes. More testing opportunities can lead to higher scores, which can be the catalyst to increased aspiration to four-year colleges among underrepresented groups.

Previous articleGoofus and Gallant Take the SATNext article For a Win on Test Day, Wear a Watch