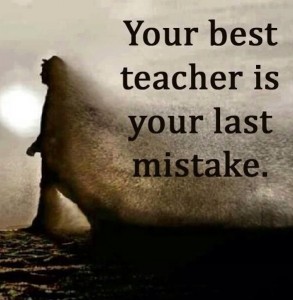 When did making mistakes become so popular? When I was growing up, I learned that the road to success was built on, well, successes. Now, entrepreneurs are exhorted to fail faster while students are being given permission to make mistakes as a natural part of learning. What changed?

Actually, for those in the know, nothing about the educational value of mistakes has changed; we’ve just caught up to the experts. Thomas J. Watson Jr. of IBM fame knew the score back in 1961:

Would you like me to give you a formula for… success? It’s quite simple, really. Double your rate of failure. You’re thinking of failure as the enemy of success. But it isn’t at all… you can be discouraged by failure — or you can learn from it. So go ahead and make mistakes. Make all you can. Because, remember that’s where you’ll find success. On the far side.

But what makes mistakes so special? For one, mistakes can definitely serve as rungs on the ladder of success. Research shows that individuals with the right mindset rebound from mistakes to display superior accuracy in given tasks. What’s more, the brains of these growth mindset (you know about the growth mindset, right?) individuals reacted to mistakes differently than those of their fixed mindset counterparts.

Researchers from Michigan State University found that the brain activity of individuals with different mindsets differed dramatically from each other, with those of a growth mindset displaying higher amplitude neural activity. Some scholars attribute brain growth to an increase in synaptic activity of this nature.

What matters more than a bigger brain is that growth-minded individuals showed superior accuracy after mistakes compared with their fixed mindset peers. These results suggest that neural mechanisms indexing online awareness of and attention to mistakes are intimately involved in growth-minded individuals’ enhanced attention to corrective feedback following errors and subsequent error correction.

So if you see value in the ability to rebound from mistakes and improve performance, just change your mindset. Who knows… you may even change your brain!