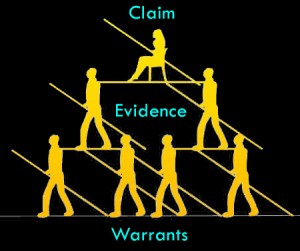 As Monty Python cleverly conveyed, an argument is a connected series of statements intended to establish a definite proposition. The Toulmin Model of Argumentation refers to that proposition as a claim. Some of the subsequent statements are, of course, evidence meant to prove the claim. However, other statements are required to interpret the evidence and show how it supports the claim. These statements are called warrants.

Warrants, also called bridges, are essential yet often overlooked elements of effective arguments. Without warrants, the links between evidence and claims may appear tenuous at best:

CLAIM: The New York Yankees are the best baseball team ever.
EVIDENCE: The Yankees have won 27 World Series.

This example of a classic sports argument highlights how even solid statistical evidence lacks persuasive power without a clear bridge between data and claim:

WARRANT: 27 World Series wins are far more than any other team in baseball history and represent 25% of all series played.
WARRANT: The next winningest MLB team, the St. Louis Cardinals, has only won 11 World Series.

The weakest part of an argument may, in fact, be its weakest warrant. Always be sure to build strong links between evidence and claim by using clear, unassailable warrants. At the same time, realize that warrants without evidence are as ineffective as evidence without warrants; the two work hand in metaphorical hand to support claims. Many debaters argue using reasoning alone and consequently fail to persuade because they forget to provide hard evidence.

Previous articleElements of an Effective Argument: EvidenceNext article Are Accommodations Available for the No Calculator Section of the PSAT?