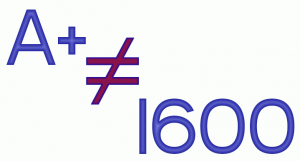 Have you ever met someone with really high grades but incongruously low test scores? Of course you have! You may even see yourself, your teen, or one of your students in that all-too-common description. We know from both reason and experience that many high schoolers earn top grades in class but struggle to match that level of accomplishment on standardized tests. Unfortunately, this trend appears to be growing worse.

Recent reports confirm that A’s are on the rise in report cards, but SAT scores struggle. Sparking such reports is a recently released study from Michael Hurwitz, senior director at the College Board, and Jason Lee, a doctoral student at the Institute of Higher Education at the University of Georgia. Their findings, according to USA Today, describe a growing gap between different ways to assess college readiness:

“…the proportion of high school seniors graduating with an A average — that includes an A-minus or A-plus — has grown sharply over the past generation, even as average SAT scores have fallen.

Just to be clear, an “A” generally indicates outstanding achievement, superior to an above-average “B” or an average “C” or the other, less-reputable grades below them. A 1002 on the SAT, on the other hand, barely qualifies as average these days. On the current SAT, that score falls around the 34th percentile, which means 66% of SAT test takers scored higher than that. Calculating how half of high schoolers can be considered substantially above average academically yet score below average on the SAT is itself a math question worthy of the toughest standardized test.

On the one hand, the problems with this discrepancy between grades and test scores relates more to perception than reality. Great grades don’t always mean great test scores for numerous reasons. High school grades and standardized test scores serve very different purposes. Plus, grades are allocated across very small groups of 3-30 students, while nearly two million college-bound seniors take the SAT each year, with even more taking the ACT.

Furthermore, high school math and SAT or ACT math don’t resemble each other as much as you’d think. Much of what is tested on the entrance exams is not tested in the same way in school, and vice versa. Understanding why a teen’s grades and test scores vary widely becomes easier when we look at these two domains like we do different sports or skills. We don’t expect an awesome guitarist to be equally adept at drums or flute, nor do we complain when a tennis champion fails to medal in track. General academic, athletic, or artistic ability rarely translates to specific accomplishment without plenty of study, practice, and coaching.

On the other hand, the grade inflation problem is real and growing, particularly among students from wealthier (and whiter) high schools than average. While individual parents or students may be powerless to reverse a national trend, they can at least take grades for what they are worth: an indication of specific subject achievement within a relatively small pool rather than an unassailable imprimatur of overall academic superiority. This pragmatic perception may take some of the fun out of report card day but will inject more realism into your college planning and test prep process.

And don’t worry if you’ve become addicted to earning the top grades in class… apparently, A’s are the most popular grade at colleges nationwide as well!

Previous articleThe PSAT and ScholarshipsNext article Don't Wish For It... Work for It