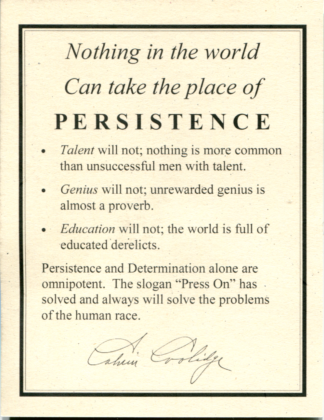 Any time test scores come back, some test takers invariably underperform relative to expectations just as sure as some NFL teams underperform during the first official week of football (I’m looking at you, Bills!) Often, the reasons driving these regrettable outcomes are very similar despite the dramatically different nature of the challenges.

Sometimes, the problem comes down to insufficient commitment.

The problem may be a sign of lack of persistence or a call for more coaching and practice.

Bad outcomes may even be the result of factors outside of your control.

No matter why a team loses or a test score comes back lower than expected or desired, the answer is always the same. press on. President Calvin Coolidge eloquently explained the necessity of tenacity and resolve:

Nothing in this world can take the place of persistence. Talent will not; nothing is more common than unsuccessful men with talent. Genius will not; unrewarded genius is almost a proverb. Education will not; the world is full of educated derelicts. Persistence and determination alone are omnipotent. The slogan Press On! has solved and always will solve the problems of the human race.

High stakes tests and sporting events share another similarity in that a single day doesn’t have to define you. Students that underperformed on the August SAT have other opportunities to test as surely as teams that stunk up their stadiums (I’m looking at you, Giants!) can redeem themselves on any given Sunday. Shake off the loss. Recommit to the win. Press on!