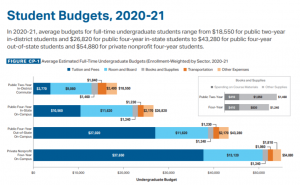 Considering all the lives, livelihoods, and opportunities that COVID-19 has taken from us so far, finding something good that arose out of the pandemic seems too much to ask. However, the global shutdown hurt some industries more than others, which meant 2020 may have been one of the worst years ever for America’s thousands of colleges and universities. The College Stress Test predicted that a surprising number of institutions of higher education were in financial peril this year, and those models didn’t even take the threat of a massive shutdown into account. COVID has been absolutely horrible for most colleges. Many college students–or at least the ones willing and able to enroll in a school that was partially or entirely remote–found an unexpected benefit from the crisis: historically low increases in average published tuition prices.

College Board’s annual Trends in College Pricing and Student Aid report usually tells a story of educational expenses far outstripping expected cost of living increases. For example, the cost of attending a public or private non-profit four year college increased roughly 26-37% from 2007-2017. Even last year, increases in average published in-district tuition and fees ranged from 2.4-3.4%, generally highest at private schools. This year, of course, nothing makes sense, as these very modest increases in the the average published tuition and fees for full-time students show:

In fact, one could reasonable surmise that the difference between the average published or sticker price and what a matriculating 2020-21 college student actually paid was much larger than in previous years, as schools were desperate to lock in as many paying customers as possible. That strategy appears to have worked wonders; few if any colleges closed their doors over the last several months. I fear, however, that many students who return home after the truncated semester ends at Thanksgiving may be disinclined to continue to pay full fare for a college education devoid of the trappings of the traditional college experience.

Which is to say that this historically low increase in average published tuition should not be taken as the start of a trend in sustained lower costs of college. Higher education appears to be a very expensive endeavor, not just for students but for the administrators of these hallowed institutions. We are still in the throes of this pandemic, which means the next several months at least presage further economic instability, social distancing, and departure from cherished norms. Schools that already faced financial distress may have found ways to survive the beginning of the 2020-21 academic year, but will they make it to the end? For the institutions that do, next year’s costs project to be substantially higher. So enjoy these low increases while they last!

For full context and detail, dig into the College Board’s 2020 Trends in College Pricing and Student Aid report.