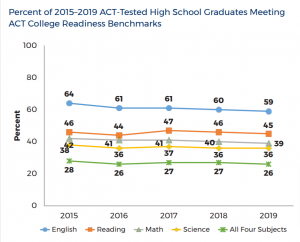 Often, we focus so much on high stakes tests that we fail to recognize them merely as intermediate steps to a larger goal. The SAT and ACT, for example, matter quite a lot, but mainly only for students striving for their choice of four-year college. And while we sometimes miss the big picture, the test makers always keep that test-to-college connection firmly in view.

How college and career ready are today’s HS graduates?

According to ACT’s report on The Condition of College & Career Readiness 2019, a little more than a quarter of last year’s high school grads met all four readiness benchmarks. Yes, obviously a lot has happened in K-12 education since 2019, but this is the last report issued since then, and we have no reason to believe current high school graduates are more prepared for higher education than the pre-pandemic cohort!

Based on the 1.78 million graduates—52 percent of the US high school graduating class, students seem to be most prepared in English but declining a bit in all areas:

Only 26% of the testing population hit readiness benchmarks in all four subjects, down from a disappointing high of 28% in 2015. So, based on this single assessment, nearly three-quarters of high school students do not project as entirely college ready.

Other factors certainly play into success in college, but the implications of these benchmarks suggest that more can be done to prepare teens for the academic rigors of higher education. Considering that, according to the National Student Clearinghouse longitudinal data, the national six-year college completion rate is only 62.2% as of 2021, a pervasive lack of academic readiness has unfortunate long-term personal and societal ramifications.

(We first published this post in 2015 but try to update it regularly.)

Previous articleWhat is a Flipped Classroom?Next article The Value of Test Preparation