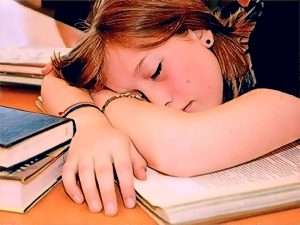 Summer is well and truly here, and that means that teenagers around the country are finally catching up on sleep. It’s no secret that the typical high school schedule is not kind to teens’ natural circadian rhythm, or the internal “clock” that determines when you feel awake and when it’s time to sleep. Adolescence is a time for intensive growing and thinking, and that requires plenty of rest—about 10 hours a night is considered ideal for high schoolers, but between class, extracurriculars, homework and a social life, that’s probably not happening for most of them.

The good news is, you can tweak even a super busy schedule so it works with the natural rhythm of your cognitive functioning. Dr. Michael Breus, a clinical psychologist and sleep specialist from California, coined the term “chronotype” to describe the particular rhythms of sleeping, waking, working and playing that people fall into. Most people describe themselves as either early birds or night owls, but Dr. Breus’ model describes four different animals (none of which are birds):

High schoolers might not have the power to change much about their schedule, at least as far as school is concerned. But if you know your chronotype, you can do little things to maximize your productivity. Go for morning or evening extracurriculars, depending on when you find you’re most awake. If you’re not a morning person, fuel yourself with a big breakfast, or if you’re always on the go during the day, wind down with a filling dinner with family. Listen to your internal clock and take advantage whenever you feel energized.

It’s been joked that high schoolers want good grades, enough sleep, and a social life, but you can only pick two. But maybe that’s not the case? Try working with your chronotype instead of against it, and you just might find yourself making the most out of your day.