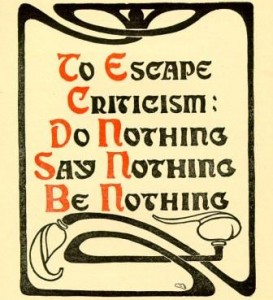 Like it or not, none of us are born perfect. Even worse, very few of us achieve perfection in any area or task. But those of us who strive to do our best must develop a thick skin, because failure always precedes success.

Unfortunately, failure doesn’t always sit well with a person. Neither does criticism, which can be a problem as constructive criticism is one of the essential drivers of incremental improvement. Can anyone really accomplish anything of consequence without dealing with criticism? Research, not to mention experience and common sense, says no:

From musicians and athletes to Nobel Peace Prize winners, business moguls and presidents, every professional is criticized about their work and their performance – and most will agree that they are better for it. Granted, it’s not easy to hear, but behind every critique lies a lesson. Those who are able to get past the harsh outer shell of criticism to the nugget of wisdom at its core will possess one of the major keys to success.

Into each life, Longfellow assures us, some rain must fall. Sometimes we’re showered with criticism too. How we handle constructive criticism makes all the difference. Kayla Matthews broke down some of the most common ways people deal with criticism. Do you see yourself on this list?

Some people seem to accept criticism rather well on the surface while internally beating themselves to a pulp. This kind of response to criticism is characterized by mentally putting yourself down and being overly hard on yourself.

Much like the Internalizer, the Self-Convincer is one who takes negative feedback very personally. However, rather than internally blaming yourself, you deflect the blame back onto others, possibly even verbally. You may not get aggressive with your words, but you are likely to challenge and even argue against negative statements as a means of convincing yourself and your critic that the criticism is unjust.

It’s natural for us to defend ourselves against outside threats, including criticism. Defenders exhibit a mild, albeit somewhat defensive, reaction to negative feedback. However, you’re not losing sleep over your critique and you’re not going to argue with your boss about what you could have done better last quarter. You likely think that your critic is somewhat misguided and are fine to leave it at that.

Handling criticism in this way means that you actively ask questions about the critique. You might feel put down by the remarks, but you aren’t beating yourself up and you aren’t deflecting blame for the criticized actions onto the person giving them. You simply want to know why they think what they do, and what you could do to change their mind.

Internalizing, blaming, or defending may help you feel better in the moment, but these self-defense mechanisms obscure real progress. Who gets results? Feedback seekers. Learning to accept and even seek out constructive criticism accelerates success. If you’re striving towards perfection, begin by perfecting your ability to take criticism!

Previous articleHow Can I Improve My Test Scores?Next article Increases in Cost of College Over the Last 10 Years