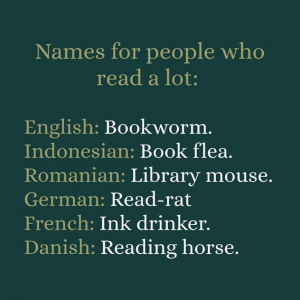 Reading, as we say over and over and over, is fundamental to learning, understanding, and living well. But maybe the practice would be more popular if enthusiasts weren’t tagged with such insulting monikers. Who wants to be called a bookworm anyway?

According to Addison Rizer’s comprehensive History of the Bookworm, this derogatory term dates back to the 16th century:

The earliest documented appearance of the word bookworm, according to the Oxford English Dictionary, is in 1580: It appears in Three Proper and Witty Familiar Letters, a series of correspondences between scholar Gabriel Harvey and poet Edmund Spenser. One of the men writes of someone reading too much, “A morning bookeworm, an afternoone maltworm.”

Back then, the term denoted idleness or vice: “Those who were bookworms were ‘candle-wasters’ and ‘maltworms,’ a reference to being an alcoholic.” Today, most devoted readers enjoy recognition of their erudition, despite being compared to vermin.

Interestingly, nearly every language finds a way to label avid readers with, at best, faint praise:

Do you read enough to earn one of these nicknames? Which one would you most prefer to be called?