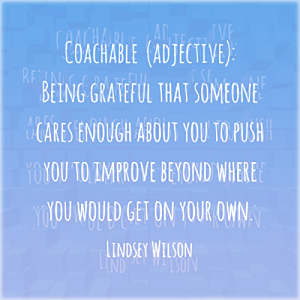 Anyone with even a passing knowledge of basketball will recognize the name of Michael Jordan, widely considered one of the best–if not the very best–players of all time. Jordan combined ferocious physical and mental strength with incomparable skill and an indefatigable will to win. However, he attributes his legendary success to one train above all others:

My best skill was that I was coachable. I was a sponge and aggressive to learn.

What does “coachable” mean? Have you ever met someone who seems sure he or she knows it all, someone who has no interest or perhaps even ability to learn from others? How about someone who crumbles under even constructive criticism, externalizing failure or blame? Those are definitely NOT examples of coachability.

Instead, consider the traits someone who is coachable shows consistently:

No matter the skill, sport, or challenge involves, that road to greatness gets steeper and more tortuous as it approaches its summit. That’s why the greatest levels of success require even more than deliberate practice and expert coaching. Make no mistake: these ingredients are irreplaceable. However, not even the greatest coach can teach an unwilling student. If you want to improve, you must be receptive to instruction and open to change. Michael Jordan was, and look where coachability took him! If you want to be your best, be coachable.