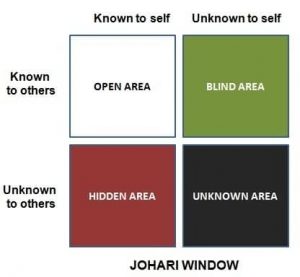 No one who lived through the second Bush Administration can forget Secretary of Defense Donald Rumsfeld’s famous observation on what is known and unknown:

Perhaps ironic based on how so many policies went wrong during that time period, this quote endures as a catchy insight into the nature of risk assessment. Self-aware individuals can make smart decisions based not only on what they know they know and don’t know, but have to also account for what they might not know they don’t know. If your head is spinning from the circular language, you’ll appreciate the Johari window, a visual representation of this concept. A two-by-two grid depicting what is either known or unknown to ourselves and others can really help highlight the blind spots in our understanding. Then again, most people–particular high schoolers and the adults that support them through testing–don’t know about the Johari window!

Standardized testing, particularly a student’s prospects and preparation, is an area highly susceptible to overconfidence. Overconfidence occurs when a person’s subjective confidence in his or her judgments is reliably greater than the objective accuracy of those judgments. Regarding the SAT and ACT, teens (and their parents) routinely overestimate their readiness based on a variety of misleading indicators. Understanding where this overconfidence originates can lead to clearer assessments of ability and smarter choices.

Researchers Don A. Moore and Derek Schatz explored The Three Faces of Overconfidence in a way that makes a lot of sense in the context of performance on the SAT & ACT:

1. Overestimation is thinking that you are better than you are.
SOURCE: Success on subjective, criterion-referenced exams along with inflated confidence in innate intelligence leads to an irrational confidence on objective standardized tests. Grade inflation only exacerbates this problem.
SOLUTION: Realize that standardized tests are very different from the exams teachers usually assign. Assess test readiness based on performance on actual practice exams.

2. Overplacement is the exaggerated belief that you are better than others.
SOURCE: As bad as we are in evaluating our objective competence, we may be even worse in comparing our skills to those of others, According to one study, 93% of U.S. drivers consider their driving skills above the median, with more than 46% placing themselves among the most skillful 20%. High schoolers often use grades and other factors to overestimate how they’ll score in relation to their peers.
SOLUTION: Colleges value the SAT & ACT primarily because those exams are designed to rank an entire cohort of graduating college-bound seniors. For a clear-eyed idea of where you land on the bell curve, take a high quality practice test and pay attention to your percentiles.

3. Overprecision is the excessive faith that you know the truth.
SOURCE: Interestingly, parents may be more susceptible to this flaw than their teens, at least as far as the tests are concerned. All kinds of crazy testing rumors tend to filter through a school community. Plus, many families make decisions based on what the exams used to be like, unaware of major or minor changes over the years.
SOLUTION: Again, great grades don’t always mean great test scores, and teachers don’t always stay on top of current testing trends. Treat test prep the way you’d treat any highly technical task outside your immediate expertise: consult an expert.

Abundant research supports the conclusion that most people–including most students–overestimate their abilities. Make smart decisions by acknowledging the many unknown unknowns in the realm of standardized testing and acting to compensate for them. Avoiding the overconfidence trap is essential on the path to peak performance and superior scores.