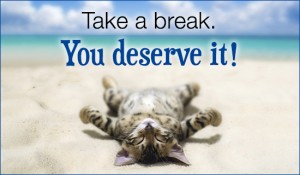 The current ACT takes over four hours from the proctor’s lengthy monologue to the last furious moments of the Writing Test. By any standard, working intently over that span of time takes a considerable toll on a test taker’s physical, mental, and even emotional resources. That’s why these lengthy standardized tests tend to include breaks.

Why are breaks important? Basically, our bodies and brains need periodic breaks to maintain peak performance. Nobody is going to physically collapse after the strain of four hours of continuous testing, but scores suffer without occasional respite. Even a microbreak–from 30 seconds to 5 minutes–flushes fatigue and promotes productivity, problem solving and creativity. Test breaks become more effective when students can get up and move around or stretch and drink water and eat healthy, performance-sustaining food

Unfortunately for today’s teens, ACT does not seem to support beneficial breaks. An official administration of the ACT incorporates two different breaks:

10 minutes between Test 2 (Math) and Test 3 (Reading)
During this break, students are free to leave the testing room. Since proctoring guidelines prohibit eating or drinking in the testing room, the break offers the first opportunity for students to rest and refuel.

5 minutes between Test 4 (Science) and the Enhanced Writing Test
This break allows students forgoing the optional Writing Test to leave. Regrettably, those students staying for the 40-minute essay are not allowed to leave the testing room. While they can stand and stretch, they are prohibited from eating or drinking.

I find this policy ill-advised and unfair to test takers. Taking into account the time constraints, mental complexity, and performance pressure of these college entrance exams, the ACT is tantamount to a marathon made up of a series of sprints. Allowing test takers one opportunity to refuel during such a sustained trial undermines performance. Willpower essentially runs on sugar; lack of fuel leads to lack of focus.

The Enhanced ACT Writing prompt has been a bit of a disaster, as ACT has failed to either provide sufficient information to the public about how the new essays will be scored or failed to properly train scorers. Either way, essay scores have plummeted, raising anxiety levels to the point that the scary new SAT is starting to look attractive. I wonder if this new break policy contributed on any level to the drop in scores on this longer, more complex writing assignment.

According to a representative from ACT, the only recourse available to address this break policy is to write ACT to voice concerns and request review of the policy. This sounds like a good idea for anyone willing to spare several minutes to promote change. In the short term, ACT test takers have several imperfect options:

1. Hope that the proctor does not enforce this policy.
Proctors are notoriously under-trained, which leads to inconsistent enforcement of what should be uniform rules across test centers.

2. Power up when you can.
Eat an excellent breakfast and bring superior snacks (think protein, fruit, and complex carbs) for the 10-minute break.

3. Smuggle in sweets.
A sugar high can be calamitous during a long test, as the inevitable crash kills performance. However, once you are near the end of the test, you can benefit from the boost a bit of candy can bring. In addition, chewing gum possesses near magical powers to improve focus and energy over a short span.

4. Skip the Writing Test.
With ACT’s recent scoring stumble and the new SAT’s inscrutable essay, colleges may be reconsidering the value of these test essays in admissions. Contact your schools of choice to find out their most current essay policies.