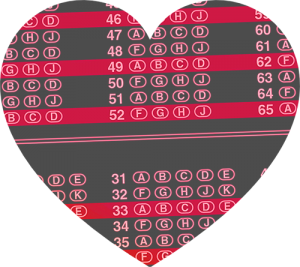 When someone mentions “tests,” the emotion that flowers in our heads, hearts, or the pits of our stomachs rarely resembles love. Anxiety typically tops the list, but feelings range along an emotional spectrum that encompasses irritation, fear, and flat-out hate. Many become irrational at the very mention of tests; at least one infamous crank has made a cottage industry out of whining about standardized tests.

So why do I love tests?

I love the challenge of a well-designed test, both the methodical ingenuity behind each question and the inexorable gauntlet of the test as a whole. I love the opportunity to compete against a potential pool of millions of test takers, past, present, and future. And, because I’ve always been good at most tests, I love to win… nailing a particularly tough test feels like a profound victory.

However, my personal reasons for appreciating oft-maligned assessments do not, in themselves, ennoble tests, any more than, say, a superfan’s all-consuming passion for soccer makes the sport any less boring for most of us to watch. High stakes, high-quality standardized tests instead deserve our affection and admiration because of how they ennoble us as individuals and a larger society.

Standardized tests are fair.
Most readings of human history lapse into a litany of calcified social stratification, gender discrimination, and racial oppression. The institutions and offices that served as gateways to opportunity have traditionally been barred to all but the elites. The SAT served as a response to an unfair admissions system, part of a movement of meritocratic values at educational institutions everywhere. Where once only the most refined social and educational pedigree could gain an applicant entrance to an Ivy League law school, those who ace the LSAT today can rise from the most humble beginnings and least competitive schools to the loftiest of legal institutions.

Standardized tests are cheap.
Standardized tests tailored specifically to clearly defined and measurable goals offer a highly cost-effective way to evaluate and assess large populations. Designing, administering, and scoring exams at a massive scale becomes far more efficient than bespoke testing, although anyone paying all the accumulated fees for SAT and ACT exams and score reports may not feel like they are getting a bargain. Furthermore, the uniform quality and significance of these scores pare down much of the costs associated with evaluating them, as any college admissions office working through a deluge of applications can attest. And even where test fees do add up, most major testing authorities work hard to expanding access to admissions testing. (Effectively preparing for certain tests, on the other hand, is rarely ever cheap. But those who dispute the fairness of standardized tests because of the self-evident link between wealth and achievement should ask yourselves, “What skill set or knowledge base that matters can’t be improved with large amounts of quality coaching?”)

Standardized tests are educational.
Truly excellent tests align so closely with the skills and knowledge required to prove necessary proficiency that simply preparing for these tests makes a person better in important areas. The process of earning a driver’s license in most states, for example, requires both written and road tests. Study for the written knowledge test depends on careful review of a state’s driver’s manual, so that anyone who passes that exam should possess a pretty strong grasp of the rules of the road. Preparation for the road test demands a similar commitment to learning to safely operate a vehicle. Visionary test makers influence instruction through careful design.

A well-designed standardized test is a many-splendored thing indeed, a valid, reliable, and fair gift that most recipients fail to appreciate. The best challenges in life demand everything we have to offer and make us better as a result. The tests I love can do that and more. Sure, the world is rife with horrible tests–poorly designed, unfairly implemented, and useless for everyone involved–but that just makes the good ones matter more. Think about it. Perhaps, one day, you too can open your heart to the truly great tests.

(This Valentine was first written in 2018, but my love for tests still burns as brightly as ever!)

Previous articleChew Your Way to a Better Test Score!Next article How Much Should a Tutor Cost?