Every twelve months, we as a society take stock of the prevailing spirit of the year that passed. Each year contributes new terms to the lexicon but also inspires heightened interest in existing words, sometimes popularizing vocabulary that has fallen into disuse. Oxford Dictionaries embraced the former in declaring “vape” their Word of the Year 2014. In honor of this disreputable yet extremely influential word, we’re exploring the root VAP- this week on the Roots2Words website. 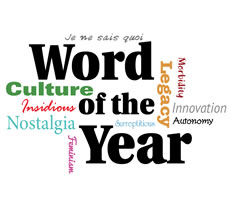 Merriam-Webster looked instead to the words that saw substantial upticks in search interest in their online dictionary. Thus, the Merriam-Webster 2014 Words of the Year channel the zeitgeist of the year that was. As our New Year’s gift to you, we’re giving this list the Roots2Words treatment. Enjoy!

2. nostalgia (noun) – a longing for home; a wistful yearning for things of the past
BREAKDOWN: NOST- (a return home) + -ALGIA (feeling pain)

4. legacy (noun) – a gift by will; something handed down or received from an ancestor or predecessor
BREAKDOWN: LEG- (law) + -ACY (state of being)

6. Je ne sais quoi (phrase) – in French, literally “I don’t know what”
BREAKDOWN: French, though a Romance language, lies outside our focus on unlocking English vocabulary through Classical roots!

7. innovation (noun) – the act of inventing, altering, or introducing something new to an environment, or something so created
BREAKDOWN: IN- (in) + NOVA- (new) + -ION (act of)

8. surreptitious (adj) – furtive; clandestine; done stealthily or in secret
BREAKDOWN: SUR- (from under) + RAP- (to snatch or seize) + -OUS (full of)

10. morbidity (noun) – a diseased state; the quality of being unhealthy, unwholesome, or gruesome
BREAKDOWN: MORB- (disease) + -ID (that which is) + -ITY (quality)

If you like this list of words, imagine how much fun you’ll find learning new roots and words every day for FREE. Subscribe to the Roots2Words Essentials program!